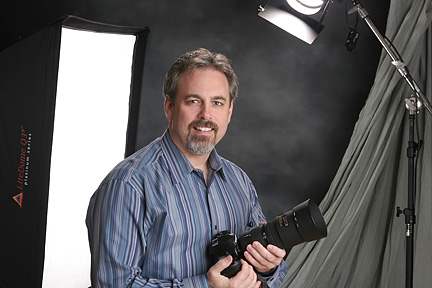 Shortly after returning from Desert Shield/Desert Storm (and while still serving in the US Navy), William opened his first photography studio in Oak Harbor Washington. After watching the response of his fellow sailors to such images after being at sea for many months, William focused almost exclusively on the newly popular boudoir portrait market. Since he typically ran a Navy workcenter on a graveyard shift, William would sleep on a beach chair in the studio during the days – waking to answer phone calls and schedule photo shoots. William studied his craft through books and magazines, and credits his lighting skills to what he learned from Playboy photographer Kim Mizuno and reading publications by Arny Freytag. William would eventually have an opportunity to photograph several Playmates and numerous Playboy models — not for the magazine, but for his portfolios and other opportunities. And he really enjoyed hearing the stories of how his work was received by the ultimate recipients, as relayed by his recent clients.

Upon transferring to southern California William worked as an Assistant Manager at a busy mall portrait studio in San Diego’s North County. He closed the studio most evenings after teaching at NAS Miramar during the day. This experience reinforced his mindset to get good shots with a minimal number of exposures, typically having only 8 shots (and occasionally a 9th frame) to capture a family portrait session. From here William once again opened his own studio in 1995, shortly before exiting the Navy. He began expanding from boudoir portraits to model portfolios and model/actor headshots. The modeling photography in particular led to photographing his first commercial assignments for (of all things) Yellow Pages ads, and even product packaging for a teeth-whitening company in the U.K.

In 2001 William moved up to the Long Beach area. He freelanced while in the Los Angeles area, but in 2004 he was lured back to San Diego to train portrait and event photographers for a new franchise company. Over the next five years William helped to open 2 new portrait studios and over a dozen on-location photography franchises. Defining techniques and processes, and providing ongoing support, he helped to develop new photographers and their businesses. The franchisor shut down in 2009. William still values the friendships he made with the franchisees, and is still in contact with many of them. And William has continued to teach, including web graphics design at DeVry University as well as seminars and workshops.

William founded Morton Visuals to focus exclusively on commercial and corporate communications photography. William joined the American Society of Media Photographers back in 1999 in order to learn more about the business of commercial (media) photography in 1999, and is still a member to this day. He served on the San Diego Board of Directors for about 11 years, including two terms as President – twice. He subsequently served as President of the Dallas chapter of ASMP.

Relocating to Texas at the end of 2015, William helped open Camera Ready Studios – a beautiful rental photo studio based in north Dallas. Morton Visuals had to start all over again, from scratch. Although a number of William’s clients hold conventions in different cities from year to year, and he could still travel to service those clients in any location, he had to establish all new local clients. This has been a definite building experience, and has allowed Morton Visuals to morph somewhat. He dedicated a new website specifically to his Dallas headshots photography, and eventually (since he still had ties to San Diego) a sister site for San Diego headshots. To see more of his business photography, please visit his website and browse the various portfolios. Or follow his photography on Instagram, which contains a mix of portfolio images and behind-the-scenes images of his photography.

Now based in far North Idaho, William is still shooting a lot in Dallas and periodically in San Diego. In between trips south he is covering Coeur d’Alene and Spokane, but essentially he works nationwide.